The Way Things Oughta Be: The Untold Crimes Against American People 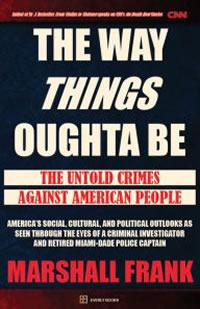 What’s the politically incorrect solution to global terrorism? What’s wrong with the education system? Is there really a God? Why isn’t the U.S. Attorney General an elected position like it is in most states? Are all politicians corrupt? What’s right and wrong about the death penalty? Why shouldn’t elected politicians who lie under oath be arrested? Why are criminals allowed to run for office? Can we make airline security safer? What’s the real solution to ISIS? How can we improve the justice system, i.e. judges, prisons, juries, laws, police, racism, the war drugs? What’s the downside to gay marriage we hadn’t thought about?

Frank baffles critics who want to label him a conservative or liberal, or perhaps, a “moderate” because he is all over the spectrum of pigeon holes. He prefers to identify the issue before attaching a label. He tackles many more concerns about corporations, global warming, entertainment, gays, professional sports, and the challenges of old age. Do people care about the under-represented minorities in America who have little or no voice in society? He raises questions and answers on how can we identify and solve these problems by offering readers an opportunity to think outside the proverbial box, that is, if we really want to.