ON MY FATHER’S GRAVE 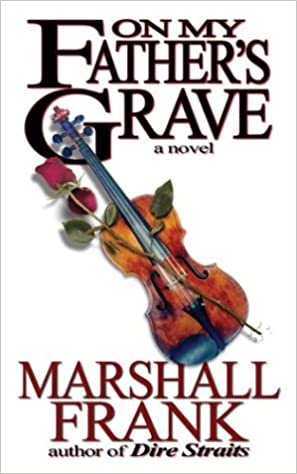 For forty-seven years, she had never questioned her identity. The daughter of an infamous crime boss and former New York City showgirl,Vicki Valentine suddenly discovers that her Mafioso father is not her father after all, and that her true father had mysteriously died in 1959.

With the help of boyfriend, Holt Whitaker, Vicki launches a tenacious personal investigation that takes her from steamy Miami to NewYork trying to unravel the mystery surrounding the fate of her father, only to stumble upon a conundrum of old family secrets that threaten her very existence. When Holt is jailed for the murder of her ex-husband, Vicki finds herself standing alone in the face of perilous mob obstacles. Desperate to find her roots and expose the decades of lies,Vicki remains steadfast in her search for the truth.While on a mission to discover her lost past, this mother of a hearing-impaired boy faces an uncertain future, a marriage proposal and an eroding relationship with her alcoholic mother, who desperately seeks to retain her daughter’s love, but dares not betray her beloved husband.

Inspired by true events, this heart-wrenching novel is dotted with murder, deceit, panic, strange forensic twists, romance, family tragedy and enough surprises to keep suspense lovers on the edge from cover to cover.

ORDER A AUTOGRAPHED COPY  OR BUY NOW ON AMAZON

A wave of puddle water crested the curb as the Yellow Cab stopped in front of the brightly lit movie theater on west Forty-Seventh Street in midtown Manhattan. A well-dressed couple got out, then scampered between raindrops until they reached the marquis. High above, the letters read, Hole In The Head, starring Frank Sinatra.

Across the street, another marquis displayed the title, Ben Hur, starring Charlton Heston.

“Reminds me of my old lady. A few years ago, I mean. Ten, fifteen, maybe.”

“I wasn’t a bum then. I was a mechanic. Worked for Petey Moran in Flatbush. I had respect.”

Moe looked away and spit to the side. “I respect ya, Siggy.”

Siggy glanced at the paunchy hobo and turned away. “Yeah, sure. Get off the pot, will ya.”

A cool drizzle shrouded New York City that Friday night as Siggy Borowski sat with his friend on an old blanket on the concrete steps. From the darkened recess of Wong’s Tailor shop, they watched strangers walk by, speculating what they did for a living, waiting for another day to pass and hoping some sympa-thetic sap would come along and hand out enough change for a pint of rye. They used Siggy’s hat.

Moe had lost his.

“Hey, Moe. That guy that just walked by. Looks just like Joe DiMaggio, don’t he?”

“Joe, Joe! For Christ’s sake Moe, what’s the matter with ya? Nobody knows Dom.”

“Ain’t him though. Imagine that guy, hittin’ in fifty-six straight games.”

Siggy shrugged. “Hey, I’d rather have Mantle on my team any day.”

“You gotta be nuts. Mantle can’t even catch a fly ball. DiMaggio spent four years in the war, during his prime. Did ya know that?”

There was another pause in the conversation. A well dressed woman stooped to drop some loose change in Siggy’s hat, mostly pennies. Moe said, “I’m gettin’ thirsty, Sig. I mean real thirsty.”

“Have some water.” He gestured to the sky. “There’s plenty up there.”

It was eleven forty-five when the long, shiny black car pulled to the curb occupied by two men wearing fedoras. Siggy remarked, “Hey Moe, somethin’s up. I seen them guys passin’ us three times already, always slowin’ down.” This time, the driver leaned across his seat and motioned with his finger.
“What’s this guy want, Sig?”

Both bums stumbled to their feet. Moe was twice the size of Siggy.

“Hey, you,” shouted the driver as he leaned to roll his window down.

Moe remained within the recess as Siggy covered his head with the old blanket and leaned into the car window.

“Hey Bud, you want to make some money?” asked the pockmarked driver bearing a rictus smile.

Siggy was suspicious by nature. “Money? Doin’ what?”

“What kinda favor? And how much money you talkin’ about?”

“Why don’t you get in out of the rain and I’ll tell you more.”

Cautiously, Siggy entered the rear seat and looked toward Moe as if to say, “Something’s fishy here.” But the thought of easy money, enough to keep them both in whiskey for a week, was too alluring.

“No. I just wanna make sure I know who I’m talkin’ with before we do business.

“I know my number by heart.”

Siggy panned the solemn faces of the two men, each in their thirties, either Italian, Greek or Jewish. “It’s right here. See?”

“Good. You hold on to that. Now, all I want you to do is deliver this little envelope to a person, a very special person. It’s a note to my girl, you know what I mean. We had this little argument and….”

“That’s it? Hand this over to some broad for fifty bucks? Sure. Why not? Got any hooch on ya?”

With that, the bum sped away with the two dapper men, barely speaking until they reached an abandoned shipyard on the East River. The drizzle had subsided as the driver parked the car behind an old warehouse where distant street lights glistened on the wet cobblestones and the stench of stale fish pervaded the night air.

Siggy looked around, confused. “Here? Your girl’s in a warehouse?”

“Well, yeah. I know it’s strange. You see, she owns this building over here.”

The driver exited the car, motioning for Siggy to do the same. The other man followed behind. “Over there,” he said, “knock on that door. I’ll be right next to you, out of her sight. I want to hear what she has to say.”

Without hesitation, the man reached into his pocket and promptly laid a crisp fifty dollar bill into Siggy’s hand.

Under cover of darkness and with the glow from afar illuminating the building, Siggy held the envelope in his left hand while he knocked on a solid door with his right. “There ain’t no lights on. You sure she’s here?” Siggy asked.

From the corner of his eye, Siggy could see the big man standing off to the side beyond the penumbra, then he heard his footsteps shift closer. Suddenly, his neck was engulfed in the crook of a powerful arm, squeezing, tighter and tighter, like a steel vise. Struggling, grabbing, gasping, he could not utter a sound as the mounting pressure converted his head into a blood balloon ready to burst. He clawed at the arm with both hands but it was no use. In those few desperate seconds, his mind fleeted, asking why, pleading for his miserable life, but the horrible pain and intense pressure was unrelenting. Twisting and quivering, Siggy knew he was about to die, wishing it would be over quickly, but the excruciating pain seemed to last forever, his lungs desperately crying for air. Gurgling, grunting, Siggy could feel his face turning red hot as his tongue protruded grotesquely from spurting lips. The rock-hard arm squeezed tighter until a sense of euphoria passed through his final moment of consciousness.

It was the last feeling Siggy ever had.