In a word: Heartbreaking

Movie goers who have negative personal history with persons who are gay, or have witnessed suffering by those who have been constantly bullied in the
school arena, should bring an extra hankie to this picture.

The main character, JOE BELL, played by journeyman actor, Mark Wahlberg, tells the intimate and emotional true story of an Oregonian father (and mother)
who struggle with acceptance that their 15 year old son, Jadin, is homosexual. Initially non-accepting, the dad eventually turns his feelings around and pays
tribute to his teenage son by embarking on a self-reflective walk across America, from Oregon to New York, speaking passionately to a myriad of heartland citizens about the terrifying costs of bullying which receives so little attention in
today’s environment.

The real Joe Bell received a flood of national attention in 2013 for his plight, pleading with average people to gain awareness about the impact of bullying,
and the sensitivity it deserves.

In real life, actor Reid Miller, now 20, has seen his acting career soar to new heights, with many opportunities in the film and TV marketplace.
My criticisms of this movie are few. I think the director could have installed more clarity to time/place scenes which leaves audience members trying to discern what, when, where and how. (Where’s that remote when you need it?) Reid Miller is a good actor, though his diminutive stature and exotically blonde features bear
zero resemblance to either of the boy’s on-screen parents.

There’s far more power in the story which is omitted here, so the reader will not know all the important facts ahead of time. For sure, regardless of one’s orientation, the story is quite emotional, likely to hit hard to anyone who has endured similar issues among loved ones.

I doubt this movie will receive any Oscars, but that doesn’t mean it’s not a worthwhile story which is well delivered by all the on and off screen persons. 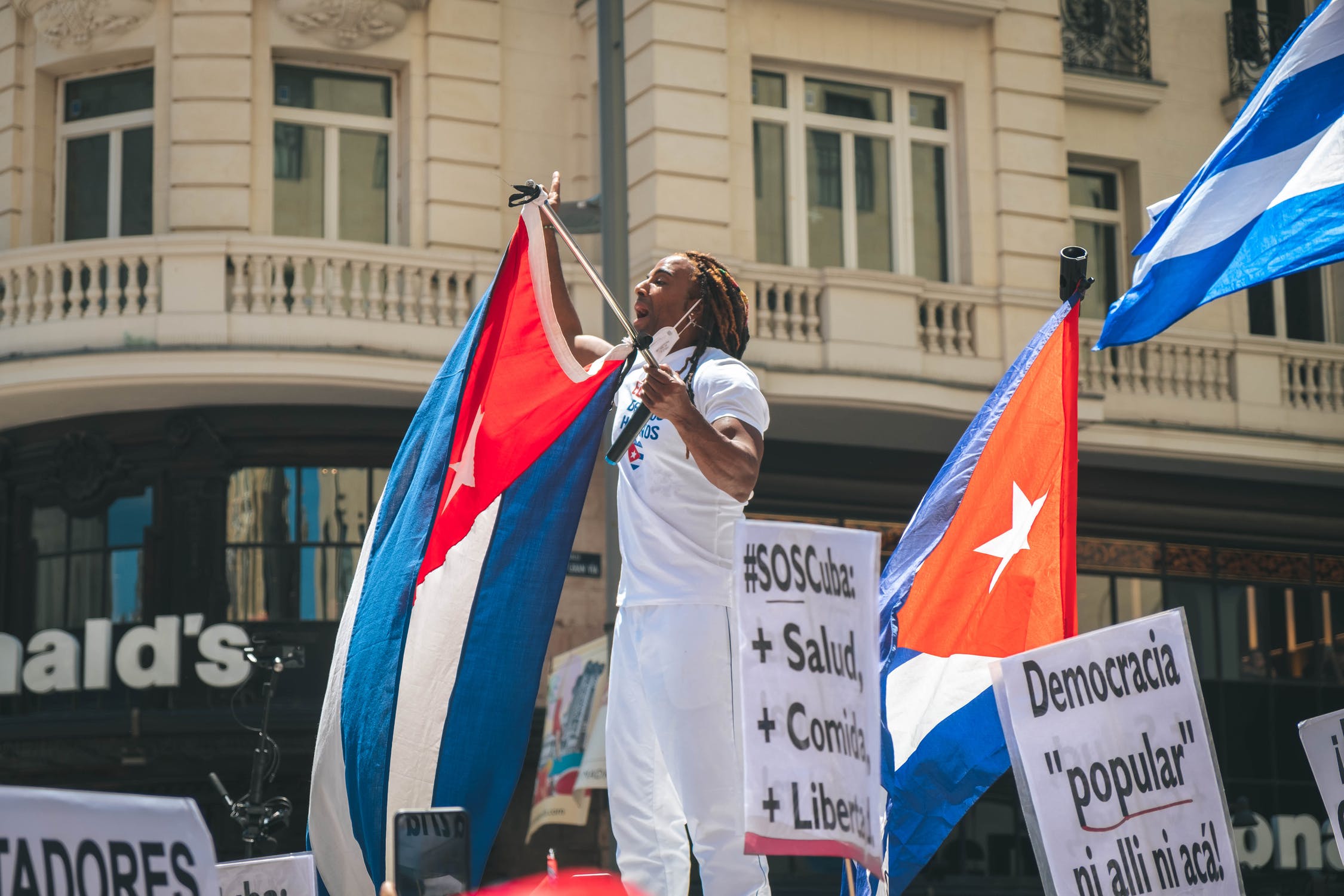 I’ll not forget my rookie year as a new cop for Dade County in 1960.

Until then, I had never met a Spanish-speaking person. The populations of Miami and Miami Beach were lily-white.

Schools were not integrated and neighborhoods were divided by race. Spanish-speaking folks were a novelty.

With Miami situated in southeast Florida, residents were mostly immigrants from New York and other northern states.

While Americans followed the war taking place in the mountainous Cuban terrain, many were happy to see crooked Fulgencio Batista toppled from power while a rugged, charismatic revolutionary leader emerged from the hills to assume the seat of leadership. His name: Fidel Castro. Cubans, and many Americans, were happy to see a new government take control of the Island nation. So what if he said he was “socialist.”

After Castro took full control over the new government, he unveiled his alliance with the Soviet Union and announced that he was a die-hard communist.

The stranglehold was now in place. Cities and towns in Cuba were “cleansed” of people who stood in the way of a one-party rule government. Thousands of dissidents disappeared. Families were pulled apart. Schools became propaganda strongholds for students. Thousands more frantically risked their lives rafting over ocean currents to America, many of whom never reached the shores. Everyone was stripped of their possessions.

The Cuban people no longer owned their homes or their businesses. There was no such thing as freedom of speech or the right to assemble or control of their future. Within 20 years, some 1.5 million Cubans managed to resettle in America and build new lives for themselves and their families.

In 1961, while in uniform, I had just attended a court session in Miami when I spotted a middle-aged man wearing a Cubavera shirt, selling bananas on Flagler Street at the intersection. Curiously, I approached and said, “Sir. Can I ask a question?”

He looked at my uniform. “About what?”

“Can I ask what you did when you lived in Cuba?”

Proudly, he puffed out his chest and replied in broken English, “I was vice president of a bank.”

“Si, a wife and two daughters.”

He went on to explain that they were living in a two-bedroom apartment with two other families. With furrowed eyebrows he looked at me strongly. With his finger pointing to the sky, he declared they were proud people and would not take welfare.

That was a lesson.

As years passed, I developed a closeness to the Cuban people who assimilated and worked hard to support their families. Many became teachers, business owners, military, entertainers and even police officers. Some of the best cops I ever knew were of Cuban heritage. I came to enjoy their music, their food, their humor, and die-hard honesty.

Castro’s plight was not a one-time event. Twenty years later, the Cuban economy was in dire straits. Multi-thousands were sick and injured, unable to work or contribute. Mental hospitals were beyond capacity. The elderly in Cuba were considered useless. Prisons were in overload. Too many people were taking, but not giving. The remedy? Get rid of everyone. What else?

Starting May 17, 1980, over four arduous months, more than 125,000 desperate human beings were granted exits from Cuba to reach America via rafts and rickety vessels from a port called Mariel. President Carter gave the OK as the infamous Mariel Boatlift conveyed desperate human beings to South Florida, devoid of possessions. Thousands died or disappeared. Miami became the murder capital of America for four years. Bodies surfaced everywhere, in waterways, the Everglades, in car trunks and garbage cans. The medical examiner needed a huge refrigerated truck to house the overflow of bodies.

The Cuban people have once again taken to the streets of Havana in protest as the government has failed to provide basic necessities.

Why rise up now, 61 years since Castro’s communist dictatorship began? Because the oppressed Cuban people sense an opening for the first time ever, daring to stand up against the regime, making demands.

Not for food. Not for medicine. Not for luxuries. But for the most precious commodity of all: freedom.

Perhaps that time has finally come.

I pray the American government will rise to the occasion.

Marshall Frank is a retired police captain and author of 15 books.

It was sometime in 2005 that I was invited to appear for a book talk plus playing a song or two on the violin at the main library in Titusville, Fl.  The turnout was great, selling lots of books. When the program ended, a little lady named Ruth approached and asked, “Would you like to play music with my husband, Dr. Jay Barnhart, he’s also a pianist?”

Uhhh…I don’t think so., I said to myself. My first reaction was something like, “Fuhgetaboutit. I don’t play music well with other musicians.  I ad lib too much.”

With her husband standing near, she replied, “My husband retired as a Medical Examiner in Miami, working with Dr. Joe Davis, you know, autopsies and such. Maybe you knew him.”

Dr. Davis was one of must admired people in the world, thought of with high esteem by every cop I ever knew. Any friend of Dr. Davis was a friend of mine. So I gandered over toward Dr. Barnhart, who seemed iffy about the whole idea. We were like two German Shepherds,  sniffing each other.

We shook hands, and made a date to meet at his house. What the heck, I thought. We’ll know in two minutes if we are compatible musicians or not.

The following week, we met at his house in the music room. “I play a lot of songs by ear,” he said, feeling me out.

Boy, could we play Dark Eyes.  Before the hour was over we play a dozen songs by ear, i.e., Gypsy, Italian, French, Classical, Broadway, etc. Dr. Barnhart was a fabulous pianist. We were a match.

Jay’s brother, also a doctor, suggested we call ourselves, “The Dick-Doc Duo.” The name stuck, people loved it.

Thus began a fifteen year friendship, which included music, but not solely. Indeed, we became the best of friends. Strange that we had never met during our tenures working death investigations in Miami-Dade in the 1980s.

Dr. Barnhart has a music mind like a steel trap. Very often, we challenged anyone in the audience who could name a published song title…that he DID NOT know from memory.  It was worth a prize, of one of my books, to anyone who could “Stump the Doc.” I gave very few book away.

Before the Barnharts finally decided to move to another state, to be near kids and grandkids, we enjoyed performing at scores of venues around Florida, mostly in the central region. He and I hit it off like two peas in a pod, not only musically, but as best friends.  People enjoy our performances, not because we were so impressive, we were obviously having fun. We enjoyed seeing people enjoy our music. It all rubbed off.

Time marches on. Jay and I remain close friends to this day although the distance is daunting. It’s been an honor, not just to make music together, but to call him my friend.