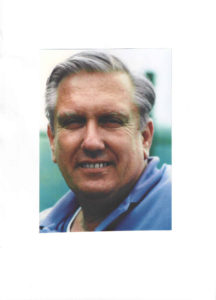 Twas a summer evening in Melbourne, Florida, 2015. We were at home watching TV when the phone rang.  I took the phone to another room, so as not to disturb Suzanne.  I said, curiously, “Hello?”

After a short pause, the woman said, “Marshall?” She had a soft whispery voice. I knew who it was. Actually, I recalled that voice as far back as 1961 when she worked for the Dade County Sheriff’s Department as a station-house secretary. No words were needed. There was only one reason that Lynda Black would be calling me. I erupted into a cry, barely able to talk. I felt the depth of her heart.

“Yes,” she replied, now crying as well. Then she said, “Last night, I got out of bed around 3 a.m. to use the bathroom. Charlie was sound asleep, snoring. When I returned, he was not snoring.”

Such is the way Charlie Black would do almost anything: The right way. His credo always stood, “There IS no other way but the right way.”

I first got to know Charlie Black as my trainer in 1961. He had a fast step and a fluid mind that was a challenge to keep up with. His nature was distant, as though it was a nuisance to be training new officer.

Charlie rose through the ranks quickly, passing every promotional test at the top of the list. He made a mark in every assignment as the department fell into an abyss after a series of corruption scandals, none of which involved Charlie. He worked mostly in the Intelligence Units. Shortly after the new Director E. Wilson Purdy (former FBI agent) was installed in 1968, Charlie was elevated to chief of detectives at the age of 32. Purdy was squeaky clean and known to thoroughly vet everyone he promoted to the nth degree. He had made a powerful impression on the department and everyone in it.

I was already working in Homicide. To me, Black was a tough to keep up with and a hard-ass authoritarian. He made many friends, but also some enemies who did not work for him very long.

I never knew he even noticed me, until early in the 1970’s, when I sat high on the Lieutenant’s list. My Homicide boss hollered at me, “Hey Frank, Major Black wants to see you.”

Charlie was being promoted to a division chief in charge of Communications, Records and the Crime Laboratory. He smirked, then popped the question: “Marshall I want you to be my right hand man. Come work for me, and if you score well, you’ll be a captain in no time.”

Thus began 45 more years of close friendship and deep respect. By virtue of being at his side, he taught me about getting a job done by-passing bureaucratic red tape. He stood up for me and helped me through some tough times, on a personal level. Yes, as the saying goes, he was my Rabbi.

One day, he called me into his office and said, “I want you to bring these papers to the Sheriff of Monroe County. Now!”

“Okay Boss, it’ll take a few hours to drive to Key West and back.”

“Forget driving. I’ve arranged the police aircraft to take you down now. They’re waiting for you at Opa Locka airport.”

I would compare Charlie Black to the likes of Donald Trump. Yes, he could be pompous at times, bull-headed, domineering and self-ingratiating. But his sights were always lasered on his police agency, to make it the very best it could be. And, he was passionately loyal to the people who worked for him.  Being among those, was a privilege.

Charlie also personified a term known by many in the Spanish community, he had a set of “cojones.” Intimidated by no one.

Charlie and I remained friends for life. He and his bride lived in Western North Carolina during retirement. He was extremely devoted to his Lynda.

Though I could probably write a book, there are many stories I omit here. Yes, he was imperfect. But this should not be the forum to discuss those bumps in the road. He was there for me, and many others, to a fault.

Thanks Charlie, for being my buddy.

And by the way; Happy 85th Birthday.

Thanks Marshall for bringing CB back into my memory banks. He was truly one of a kind. Great guy. I am proud to have worked homicide with you and other “stand up” detectives working under Charlie Black. As you said, their were some who didn’t like him. They were very few in number. Great smile. Never heard the man raise his voice. One time he walked into the homicide office with the shark. He looked at Bob Norris, our administration lieutenant and quietly asked, “Hey Norris, how much of that hair can you fit under a brown helmet”? That’s all he said. Turned around and walked out. We all got the message. The office kind of emptied out and I made a beeline to the airport barber shop. I was 9th in line. Our hair apparently got too long but he never said get a haircut. We all came back with white walls, areas around our ears that the sun Hadden seen in months. There are more stories, but suffice it to say, that was Charlie Black. A man’s man, a cops cop.

Everybody should have someone like that to feel good about! Many people do not.

Marshall very nice tribute to your mentor, Rabbi and friend. I could plug in Colonel Bobby Burkett’s name and steal this writing. Too often some people forget the influence of the true professionals in our business. It’s all the better when they are our friends!

Charlie was one of a kind and a great mentor. He took the time to advise people that worked for him and made improvements in all aspects of the departments that he supervised. RIP Chief Black, you will never be forgotten.

I knew and liked Charlie Black. He was a good leader and a good man.

Thanks for sharing your memories. I was fortunate to have worked for Black in many different positions and ranks. Sometimes on his good side and sometime on his bad. But we dealt with our differences face to face.

Black was an outstanding member of the LE community and not soon forgotten.

Nice story Marshall. I never had the pleasure or experience of working for Charlie Black, but when I was in law school and after graduating, he, for some reason, took an interest in me and we always stopped and talked when we would run into each other at HQ. Nice guy and he never talked down to me. You could tell in the first minute or two of the conversation that he was smart as a whip. Sorry I never got the chance to work for or with him. I’m sure he could have taught me a lot.

Charlie Black made me detective and it was a funny story involving an armed robbery, a chase, wrecked cars, arrests, and his laughing at me. But he laughed at and with me for many years more. I just admired him. He sent me on several special details over the years and failure was not acceptable . He instilled that in a lot of detectives and they know what that meant.

I’d been around for a few years before Charlie came up through the ranks. I saw a man who was dedicated to the Dept & he possessed an exceptional personality that made others aware of his presence. He was the kind of guy that looked you in the eye when he was talking to you he demanded respect & he gave respect to others.
Charlie & I didn’t always agree we had our problems but we always had a drink later. I think he knew that if he asked me to ride into hell with him to put out the fire I’d be by his side. [ I never told Charlie that an unnamed Capt once referred to me as Chief Black’s hatchet man when he found me in his station. As he & I were the only two close by I looked him in the eye & replied thanks for the compliment & if I was you would be the first to know Capt.
I cherish the good times & memories we had together thank you Charlie for being part of my journey.

Marshall, what a nice story about two real good guys and great police officers. I never had any dealings with Major Black, but I knew guys would shake in their boots when he came around. My first face to face with Major Black was in 1971, I was on motors working for the Redman and happy as hell. I remember it was payday Friday and I was looking for my check. I was told by the front desk Sgt that Captain Clifton had it in his office. Went I entered into his office, he told me that I was to report to Major Black the following Monday morning at 8:00AM, I was transferred to Homicide.
As I made Sgt, Lt, Capt and later Major, Charlie Black was always the person to talk with, regardless os his career. We had some great funny times on several investigative trips. If he liked you, you were his friend. What a great leader.