Subtitle:  How Black America Can Make Its Second Escape from the Democratic Plantation.

I never endorse books. This is one of those rare occasions.

One of the brightest young Americans I’ve heard in a long time. Once she gets going, there’s no one who can keep up with her. Many of us have seen or heard this woman when she’s in a talking mode, usually pertaining to black people who insist on clinging onto the left. She has been called to testify before a congressional committee, to the chagrin of people like Pelosi, Schiff, and Schumer.  There is no one in the public arena who has the charisma and charm (and intellect) of Candace Owens.

In her book, she shares how … in her early life … she had been programmed to believe it was the duty of blacks to be ingratiated by the left wing of the party, to whom she should owe her allegiance. Then she came across talk show host, Larry Elder, a bright man in his own right (and black) who caught her attention to the other side of the coin, and that it was the conservative wing of government who provided the opportunities of self-governance.

Here’s a few sentences from her book, Blackout, already among best sellers according to the N.Y. Times. Listen to the magic of this lady:

***  Black America, much like the Jews in the Old Testament, has been liberated, but somehow back into the wilderness by the false prophets of the Democratic Party.

***  While Democrats have long acknowledged our struggles and the crimes enacted against us, they have done very little to provide actual remedies or prepare us for a future that doesn’t center on our brokeness.

***   Citing Larry Elder, Ms. Owens writes, The biggest problem that black people have is the percentage of blacks, 75 percent of them, that are raised without fathers.

(We should note here, that the ratio was 25 percent raised without fathers, when LBJ passed the massive welfare reforms in the late 1960s) 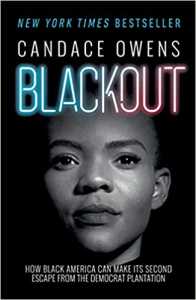 Candace Owens at hearing on Confronting White Supremacy – YouTube  showing Ms. Owens testifying before congress.  Watch how she electrifies a room, especially in the last two minutes of the segment.

Meanwhile, I highly recommend this book.  You’ll walk away knowing more than you thought you knew, regardless of political parties..

To broaden one’s perspective and knowledge regarding systemic racism, I highly recommend reading “White Fragility” by Robin DiAngelo and “Rising Out of Hatred: the awakening of a former white nationalist” by Eli Saslow. Would be interested in your review of these two books.

Thanks for the book recommendation and the link to the congressional hearing where Ms. Owen’s “hit the nails on the head.”

Candace Owens would be my recommendation for the first woman President. What we have been offered for female President (and current vice President) choices are socialist/communist trojan horses, and have to be defeated.

Why do you insist on dividing us? Are we “one nation, under God…”or not? Look at a photo the the now deceased Strom Thurmond, and one of Al Sharpton. Those 2 men have a common ancestor. The movie, “Remember the Titans” with Denzel Washington has a quote from the coach about Gettysburg, that says it all. And it’s a great football movie with great music. Dem and Repub are just political parties made necessary for the convenience of the Electoral College system.

To Christopher. Kamala Harris did have a black father at home. Yet are you calling her a “socialist communist trojan horse”? Michele Obama too, had a black father at home, and yet she too is often scorned as a “liberal”. I remember an old movie, “Pinky”, I think, with Jeanne Crain as a light-skinned black woman who is terrorized by white men driving by her. If she had had her father with her, would he have been able to protect her? Denzel Washington’s movie “the great Debaters” too, shows the dilemma of a black father. His movie about Malcom X show what happened to his father. If white supremacists are often the root cause for the disppearance of black fathers, why should they not be dug out like weeds, so the garden can grow?

Helen: “If white supremacists are often the root cause for the disppearance of black fathers,…”
Damn those white people! Killin all those “black fathers.”
As they say in Chicago…Move on, nothing to see here.