This posting is directed toward local friends and associates who live in Brevard County, particularly between areas of Cocoa, Suntree and Melbourne. If you love good food and classy atmosphere, I hope you will give it a try, you’ll find it quite different than ordinary breakfasts.

Nick had been owner of the corner restaurant, Time Square Diner, on the far end of the Publix Plaza on Wickham and Interlachen Road.  He sold that then opened a smaller, upscale diner-like restaurant two doors away, now called “Niko’s Cuisine.”

I was amazed at the breakfast, not only good portions, but delicious as well. I had a Breakfast Pizza, then took half of it home. The pizza crust is thin, and the toppings are plentiful.

Prices are low, considering what you get. My breakfast pizza was eight bucks, enough for two, or even, three.

They are also a well-established to-go operation for lunches.

Drop in and tell Nick I sent you.  You won’t be sorry. (No, I’m not pandering for a free meal) 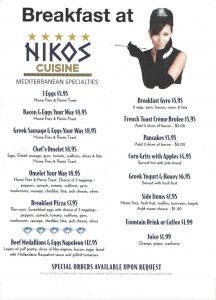 Sylvia and I agree with you in total. We absolutely love NIKOS. We look forwar45d to visiting NIKOS when we return to Melbourne in December.