Just wanted the world to know that Aidan Lytle, age 24, a Junior/Senior at University of North Carolina, Greensboro, has received a certificate of High Scholarship in Math and Physics, as he posts a 4.0 grade average.  He is presently researching Heavy Ion Collisions in Nuclear Physics and the effects of network topology on population dynamics in evolutionary graph theory.

Don’t feel bad, I can’t translate that either.

Yes, he has brains oozing out his ears. Must be in the genes.

Aidan, who is also a Parris Island trained Marine, is also an accomplished musician. Like many of us, he has had his share of struggles in life, but manages to emerge as he reaches for the top. He’s a very special young man.

If you like, please drop a note at the end of this blog…let him know he’s special. 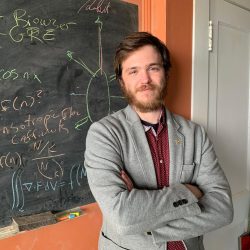 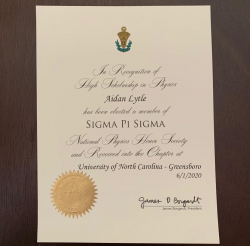 Congrats Aidan! You are special! 🙂

Congratulations, Aidan. I can understand why your grandfather is so proud of your accomplishments! You definitely sound like a chip off the old block. Wishing good luck!

Aidan,
Congratulations! I’m glad Marshall introduced you to me. In a society that sometimes eats its young, it is great to see a university student who is both operationally astute and pragmatically sensitive . I’m sure you already know, but your approach to life will take you far. I only hope you ask God to accompany you on this glorious trip. He will serve you well!

What a wonderful accomplishment and so much of which to be proud. Now go do something like save the world, end hunger create world peace. You have the ability and brains – make it happen. Best of luck and all that comes with hard work. You deserve it!
Congratulations.

I am delighted to hear of your very special grandson, Marshall! My son also majored in physics, and I know how hard that is. Good luck to Aiden as he follows his dreams.

Outstanding. Gives us confidence in the future when we hear this sort of thing. Congrats

Congrats Aiden!…… just keep on reaching for the stars. In my books you are already there.

Congratulations, Aidan! Wishing you all the best life has to offer! Follow your heart!

Wow, he did inherit some priceless genes. With those grades in that particular subject (can you ‘slpain it a bit better this time?) he will continue to make you proud until you eventually forget how to use computers!

Keep up the great work; you have earned all the accolades. But who in the hell is this Marshall Frank kook???

You’ve set yourself a high standard! And now is it on to grad school? Congratulations and best wishes for continued success.

Yes, I am applying to graduate programs this fall.

CONGRATS Aiden! Wow a USMC trained scientist, with a 4.0 GPA!
Hope for America springs forth still, from the DNA line of Marshall Frank!

I have seen a Heavy Truck Collision; but never a Heavy Ion Collisions.
Congrats from a Navy Guy

It’s not bragging if it’s the truth ~

Congratulations, for lots of hard work to achieve that! Eve Edwards

Congratulations. Your studies are way beyond my comprehension, but I wish you continued success.

Aidan has got a lot on the ball. And, of course, this ability is family related. A violinist’s tuning fork is marked “A 440.” But at what temperature?

Standard temperature for acoustics is 68 F.

I’d be bragging also. What a special young man he is, and I wish him the very best. He’s being educated in my native state which also adds to his specialness!

Captain…this is no surprise. He takes after grandpa.

Thank you for all the recognition! I appreciate it. I also appreciate grandad writing this article. It has been quite a lot of hard work, but I do plan on going to graduate school to study physics or mathematics.