In my 2015 book release, The Way Things Oughta Be, I offer numerous chapters with analyses and suggestions for improving the world, whether it be politics, science, education, criminal justice, family issues, love and romance and so much more. At the very end of the book, I present a chapter titled, “Afterthoughts” which is a list of one-liners, without essay or analysis.

I thought some folks might be interested…so I extracted this chapter and created a short blog.  (With the author’s permission, of course) See what you think.

Sometimes, a simple answer can identify a question.  According to your author, here are a few one-line reflections on – The Way Things Oughta Be:

“The Way Things Oughta Be” is a comprehensive book of unique ideas about a myriad of topics.  Signed copies available at my web site: www.marshallfrank.com or via Amazon.com 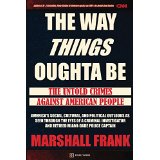 Your comments on mental illness are the most true.

I agree with most, but not all, of these. The one that stands out most is the banning of telephone solicitors!!! (And I mean ALL of them.)

I concur with most of your afterthoughts. I am a wordsmith and especially dislike “African-American” because it is so imprecise

I absolutely agree 100% with every item!

Hey Man! I agree with everything you said except one!

About that one-way ticket, i’m still waiting for Whoopi and her Hollywood friends to relocate out of our country as they had promised if Trump got elected. Further, I would include ALL those who hate the USA, including legal citizens, be given a one-way ticket to the country of their ancestors, with no return to the USA allowed; but the cost of those tickets might double the current national debt.

Man, you are so right!

I absolutely love your comments. African-American???? What the heck is that. Blacks??? they are brown. Please refer to any color chart for comparisons. Yes, now I am labeled a racist because I expressed some of my frustrations.

English by all means should be the official language. Darn, there I go again being anti illegal aliens.

And last but not least but my favorite complaint not covered above is the massive fraud, waste, abuse and corruption by all US Federal Government agencies must be stopped.

Your one-line reflections on The Way Things Oughta Be is basically common sense. Unfortunately, many people are not blessed with any. When that is combined with people that are determined to impose their not so common sense way on everyone, common sense goes out the window. The idea of being able to choose what sex you feel like being is the “not so common sense” I’m talking about. This may be one of the more bazaar instances but there are many more that have infiltrated our culture in the past 50 years.

If the America was divided in two, one using the U.S Constitution as it exists is today and the other using the U.S. Constitution with your one-line reflections on The Way Things Oughta Be added, I think many Americans would choose the latter.

Only issue is regarding the Dept of Education. Need to repurpose to train all of the inhabitants of Washington DC to be efficient, productive, responsible employees of the government they swore to serve.

Even with its many aberrations I can’t imagine mankinds progression thru the ages without rules (i.e. thou shalt not kill) to good behavior. Our four fathers had it right ” IN GOD WE TRUST .” Make that an option and we are really in trouble.

Sorry Pat, but your statements don’t hold water. One can easily deny a deity and still follow the so-called “rules”. Every one of the “Ten Commandments” is simply a common sense statement, geared towards a civilized society. One does not have to believe in a deity to follow them. There may be atheists that pattern their life based on them, while self-professed Christians may break them regularly. How many criminals profess to be Christians? How many Muslim terrorists follow the religious rules of the “religion of peace”?

Count me in as agreeing with them all especially # 7.
Charlie.

I agree with banning all telephone solicitors. I just had major abdominal surgery, and it takes me at least 4-5 rings to get up and get to the phone, only to hear another call regarding credit cards or Medicare devices for seniors. These constitute 90% of the calls I get daily, and I am sick of it.

let it go to message, I do then when you have the phone near you delete all the messages at once, most caller will not even leave one.

The federal government needs not only a Special Department of Education, but also a rule stating that all politicians should be required to take a course in education, history, humility, common sense, foreign geography and a few dozen other things I have not mentioned. It would perhaps make them more understanding of people who actually live in this country and contribute to it and its being, but do not make the minimum wage while not having expense accounts that are more than the average income. income.

Now it be more candid: The Department of Education is run by idiots who have no idea of what education means. The children attend private schools, have friends that have never really had to be concerned, because, ignorant or not, they have a few bucks to get by on.

Now, as to identification. I am an American, Danish, Low Dutch, who give a hoot person. In other words, my grandparents came from a country other than this one, had kids who had me and I would like to consider myself just a plain old American….wouldn’t it be nice if others felt that way instead of finding fault with their heritage and thinking that they should have some special name…It is time for the people in this country to consider themselves United States people and forget all the B.S. that tends to separate us like animals into herds….let’s get real folks!!!

Fore-thoughts or “Afterthoughts” I like the way you THINK.

Some good points, I agree most with not having to receive nuisance telephone calls. There should certainly be technology to prevent these calls, I get several a day, sometimes at inopportune moments and they can be most annoying. I think it would be hard to make it illegal in a land of free speech, but they could certainly be blocked.

No one could have said anything above better than you. I agree absolutely. Amen