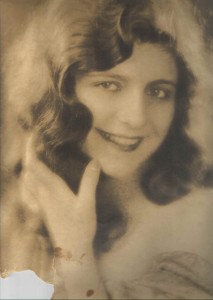 I say “is” because she still lives in the mind and heart of at least one person in this world. Among her contributions to humanity, she was a truly dedicated mom in every sense of the word. While she may no longer exist among us these last forty years, she still deserves to be honored this day.

Vivien Peterson was born in Chicago, 1910, the eldest of two daughters to humble Norwegian parents. Both girls were beautiful and exceptionally talented. Frances was a natural blonde and went on to become a Rockette at Radio City Music Hall, New York. Vivien was a striking redhead who kept her dark auburn color throughout life. Later, people compared her glamour and talents to Rita Hayworth.

Vivien studied piano and dance, and voice, and became a local sensation of sorts, busily peforming classical concerts, musical theater and vaudeville by the time she was sixteen. She met Arthur, a Jewish entertainer already famous in vaudeville circuits for his comic rube character, often billed on the marquees with burgeoning stars like Rudy Vallee, Milton Berle and Fanny Bryce. He had been partnering with Ginger Rogers when he fell head over heels in love with Vivien. She was 19 when they married. Vivien became his straight woman, joking, dancing and drawing laughter from avid audiences.

Life was good for the loving couple in the 1930’s. While most Americans were suffering through the depression, their income was far above the norm. Vivien gave birth to two boys in the late 1930’s, but the happiness didn’t last long. Arthur, the rube comic, died shortly after the birth of the second son. With vaudeville now relegated to the history books, Vivien used her talent in New York night clubs to make a living. She shared the stage at the Queen’s Terrace with Jackie Gleason and Sophie Tucker still in their formative years. The boys were often cared for by her mother and sister.

Night clubs were a magnet to organized crime gangsters. They swarmed around Vivien like moths to the flame. She married again, to a professional gambler named Willie who had long placed her on a pedestal. 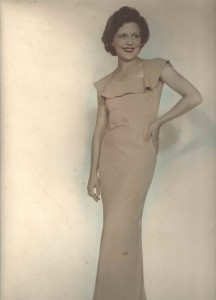 Tragedy struck again when her eldest son drowned in Flushing Bay at the age of seven. After then, Vivien’s hair turned forever white, though she made good use of Clairol to keep herself an auburn redhead.

Following the death of her oldest boy, Vivien became more protective of her remaining son. She, Willie and the boy moved to Florida as the great war still raged on in Europe and the Pacific. Willie opened an illegal casino in a Miami Beach hotel, protected by the chief of police, mayor and other officials, all on the take. Life was good again. Vivien doted over her son who she envisioned as a future concert violinist. She made sure he had private violin lessons, shoe inserts for his flat feet, swimming lessons, bedtime stories and lots of love.

Cigarette smoke and booze prevailed throughout the living room as New York gangsters and their ladies often visited the apartment. Vivien bellowed songs like Sophie Tucker from the piano while the boisterous array of northern visitors and friends delighted in her ebullient personality, not to mention her dazzling beauty.

Willie died of natural causes in 1949, leaving Vivien with nothing but a car and a wad of cash from his pocket. Twice widowed and with a son to support, she went back to work teaching in a dance studio and playing ballet music on the piano for the students for $15 a week. It was the first time since childhood that she experienced poverty. Despite the hardships, her son remained her first priority, making sure he still had love and attention, private music lessons, inserts for those shoes, an education and plenty of food even if she had nothing to eat for herself.

She remarried one more time in the mid 1950’s when Bernie the Bookie, another old-time mobster who’d been a widower, came panting after her. With her son now a teen, life was happy again. She became a business woman and opened her own dance studio, eventually earning love and respect from hundreds of students who remained devoted friends with her forever.

Ten years later, 1966, Vivien became a widow once again. Bernie died of heart failure at the same time she was fighting brain cancer. She succumbed later that same year. In her last months of suffering, she had no one to care for her, except her adult son who nursed and loved her for six long months until he watched her take her last breath.

Vivien’s heart may have stopped in June of 1966, but her son’s heart continues to beat today fueling warm memories of the greatest of mothers that anyone could ever dream of. Her son never quite made it to the concert halls, but he still plays violin to this day, thanks to her.

As that boy lives on, Vivien will remain alive. He’s 76 now, and hopefully has many more years ahead before her memory dies with him.

Before passage of time renders her extinct, Vivien is honored this day for gracing planet earth with the most wonderful of moms who ever lived. She not only taught her son about devotion, integrity and sacrifice, she was a colossal role model for instilling strength and resilience in the hardest of times. Without her guidance and eternal optimism, he may not ever have managed his own hardships, and gone on to enjoy the successes in his own life. For through Vivien, he learned the essential art of loving and being loved. 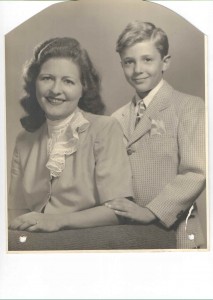 I think that was fantastic being I knew your Mom it just made it more compassionate, she would be so proud of you today.
She was a great lady and you are a great son,