It was eight years ago today, October 21st, 2006, that I met a beautiful 13 year-old girl named Esther Muradov. Why is that such a big deal?

Because of her, the Creative Arts Foundation of Brevard, Inc., was born. This non-profit organization was formed to seek and assist exceptionally talented youngsters who have worked passionately toward improving their skills in music and the arts, and to help them realize their dreams. Since being formed, the foundation has provided more than seventy young musical talents with opportunities they may not have realized otherwise, including partial scholarships, music lesson, instruments, and venues in which to perform. More than $55,000 has been awarded in prizes and grants to the most needy of those youngsters. We have held over forty performance recitals featuring kids from ages 9 to 19, and five annual music competitions, awarding $1000 prizes to the winners, and lesser prizes to deserving young musicians and singers. The funding comes from generous lovers of talent within the community. It would never have happened if not for this young prodigy.

On that day in 2006, Esther visited our home with her mother, a piano teacher, to play the first movement from the Vieuxtemps Concerto.  Our expectations were low. She was petite and fragile for her age, but enormously confident as she raised the violin to her chin. I figured this would be a nice little tune. Instead, we were treated to a professional-level concert. Being a fair-to-middlin violinist all my life, I recognized superiority from the first note. My hair rose on my arms. I thought I was in the midst of greatness. By the time she finished her last note, our jaws remained on the floor.

Instantly, I seized the moment to pepper her with questions. Her hopes, her desires, her future ambitions, her idols, anything I could learn about her. She was as articulate as she was musical. She had practiced almost four hours a day since the age of four. She loved her music. Her favorite violinist of was Jascha Heifetz. Her greatest hope was to compete on an international level, and perhaps, one day play in Carnegie Hall.  Her mother said it would be a difficult dream to realize, because they didn’t have that kind of money, and her cheap violin was inferior compared to other advanced violinists from around the world. 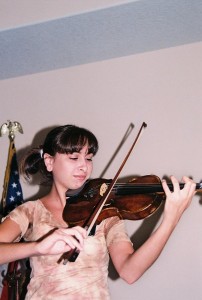 We held a fund raiser in a small Rockledge church double-wide with Esther as the star, providing a concert of several wonderful pieces for a small audience of nearly one hundred people, each paying $50 per ticket. I loaned her my 220 year-old Italian violin to use instead of her own. The room was filled. The recital drew standing ovations.

Esther went to Ibla, Italy and competed with the major youth prodigies from around the world, reaching the top of her category. One of her awards was the opportunity to play a recital  — where else? – in Carnegie Hall, New York City. Later that year, we attended her recital as I watched Esther and my treasured violin fill the entire room with a perfect rendition of the Lalo Concerto.

Talk about a feel-good moment.

Because of the contacts made through that first recital in Rockledge, Esther was awarded a full scholarship to attend Phillips Academy in Andover, Massachusetts, thereby by-passing Rockledge High where she had planned to attend. Fast forward: Esther is now in her senior year in Columbia University and plans to attend medical school next year. I’m sure she’ll be as great a doctor as she is a violinist. She’ll always have her music as one of her life’s enrichments, playing in ensembles and other venues whenever possible.

So, on this eight-year anniversary of first coming to know this prodigious young lady, I wish to thank Al and Sue Giddings of Suntree, who first introduced us to the Muradov family. We’ve also been privileged to maintain a wonderful friendship with Esther’s mom, Pervin, an outstanding pianist in her own right, and her dad, Nazim, a professor of science and talented musician as well.

But most of all, thank you, Esther, for being just who you are. There are many other young prodigies from your community who — as recipients of our assistance — appreciate you being the inspiration for the birth of this foundation. ( To get a video glimpse of Esther’s musicianship, and  other bright youngsters, visit www.CAFOB.org) 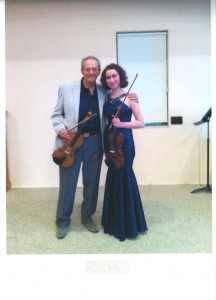 Had the privilege of attending one of her performances and was left speechless and breathless. Quite the young virtuoso and destined to succeed at anything she puts her mind to. Congratulations for introducing this fantastic young lady to the rest of the world.
I look forward to more updates on Esther and her talented family and friends.

A beautiful story. Thank you for making us all feel better.

It takes two parents to produce a child but it takes an entire community to raise a child.

Dear Marshall, Suzanne and all Esther’s supporters we feel very fortunate to have met

you, it’s been amazing journey!! We’ve come along way, and it’s great to see that the

wanted to THANK YOU for believing in Esther and investing your time, efforts in her

Miracles happen every day in America. Esther is one we can all be proud of. What a fabulous story Marshall.

Marshall and Suzanne Frank are miracle workers who devote much, if not most, of their personal lives helping talented young performers enrich their lives through the performing arts and/or visual art (paintings and photography). Our community owes them a debt of gratitude for all they do make life more wonderful for our residents.

I’ll always remember your discovery of Esther… It was a heady time for you and became the same for me.

You and Suzanne’s enthusiasm opened the doors for me to find out that I too should share for the betterment of society.

Thank you for being the friend you have always been!

Marshall, You made My day. She is wonderful to see and hear and you and Suzanne are a super couple. I am honored to know you two and to witness what you do for others.

Knew Esther when she was a babe in her mother’s arms, and was invited to our Teddy Bear Tea. Her mom has always been a musical wonder; so it is so great that the young lady, Esther, has done so very, very well through the years. You do so much for the young wonders we have in our community.

Indeed, The two most valuable people I know of, Marshall Frank and his talented wife Suzanne; putting in a word for those over 50, that Marshall and his wife give Seminars for, titled, like “so you want to be a Writer?” Not many of us had the pleasure of Marshall’s help when we were young, but he gives, now, of his expertise, his valuble time and effort to share what brought him to being the special Author he is today; For my edification, his Seminars inspired a recent work, his genius at the Violin was the catalist. Please add my “Many Thanks” to the list of those you have sent on to a bigger and better future. Ima

Marshall,
thanks for telling this story about a very talented young violinist whose playing I am privileged to have heard.
Jan Siren