Our previous marriages ended up in ruins. So, we figured our luck might change if we’d start this one in ruins. It worked.

Yesterday, June 14th, was our 25th anniversary. One might think that’s no big deal. But it is a big deal if the groom had four previous wives and the bride had two previous husbands. We were mired in failed relationships, which is why we avoided any form of serious relationship after we met. Marriage was synonymous with doom…for us both.

That was the best start ever. No expectations, no presentations, no faking no pretenses. What you see is what you get.

She was still married to #2, though she had left him a year before. I was technically still married to #4 who was preparing for divorce. We didn’t date until we were both free of marriage. Then, it was an occasional movie, a dinner, and … the “N” word.  Imagine being in our forties, going out, and the woman has the audacity to say “No.”

Two-and-a-half years later, we eloped to Hilton Head Island. We told no one (except my best friends, Harvey and Judy Glaser) who stood for us and shared the festivities. We simply didn’t want to hear the cynics; “Wonder how long this will last?”

Presided over by a local Notary Public, we all assembled at the Baynard Ruins of Hilton Head, the remnants of a grand old pre-Civil War plantation, turned mostly to rubble with some original stone, sand and oyster-shell walls still standing. Now a park overrun by forest, the site is preserved for nature lovers and history buffs. Yes, we stood in the ruins on our wedding day in 1989 and had a four-person reception on a beach blanket with wine and finger foods. It all got better from there.

Since June 14th, 1989, we both have enjoyed many accomplishments, individual and together. Our arguments have been few…and the winners are equally divided. Our greatest challenge was in the mid 1990’s when my two grandkids (then ages 10 and 11) were in great need of home, care and the love of family. Suzanne unselfishly rose to that occasion and joined in the custodial arrangement. Those two kids are now in their late 20’s…fortunate to have had Suzanne in their lives.

At the beginning of each of my twelve published books, you will see a page of acknowledgements ending with: “I owe my love and devotion to my wife, Suzanne, the most perfect human being on planet earth.”

And that’s no lie. 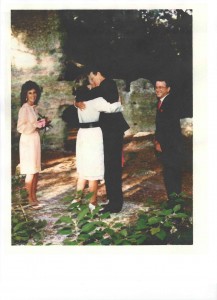 Lovely tribute, and nice that your 25th coincides with Father’s Day. Best wishes for good health and continued happiness, Sandy

It’s nice that you got married on Flag Day. Happy Anniversary!

Congratulations to both of you! and wishes for many more anniversaries. Best regards,

Beautiful story! Congratulations, best wishes for many, many more.

Congrats. I’m happy for two. I wish you MANY more.

Congratulations and Gob bless you both.

Big Congrats to you Both.
Sorry we missed the party. My Bad.
Glad it was a good time by all.
All the best in the next 25 years.
Figaro

Congratulations my friend ! ! ! ! Best wishes from the Berrettonis’ . We have the same family values…….so far now, we are on the road to the 36 years, next December, it seem to be like it was yesterday and plenty of happiness. Again, enjoy this celebration. Ricardo and Stella.

Congratulations and it is a big deal!

I feel so privileged to have been a part of your celebration. I love you both so very much. And THAT’S no lie!

Congratulations on your SILVER Anniversary Marshall & Suzanne.
While we are pikers, compared to you both; I was twice divorced &
Evelyn only one time divorced. But, we look forward to our 25th
Anniversary and it too will be a big deal. A Universal God is Good!

A story that few people could tell. It was beautiful and so wonderful to know that there are people in the world like you and Suzanne. May your happiness continue.

Congratulations on finding each other and enjoying 25 years together. Lets hope for many more.

Suzanne and Marshall,
Congratulations to you both. We are so very happy for you and wish you another blissful twenty five years. After that we will need to talk!

Love you both,
Dick and Dianne

Congratulations on the big 25, Marshall and Suzanne. I think the wisdom of time allows us to learn who we are and who we are not, and who we wish to be. Should your marriage be fertilized with the most gracious, understanding and loving woman, supported by the strength of a good, caring and sensitive man, you get what the two of you have. We’ll be married 4 years in July. You were there at our beginning. May you be an inspiration for us on what a good marriage can be. Love to both of you, Les and Gordon

Love it. Congrats Marshall and Suzanne.

Congratulations and Happy Anniversary. A beautiful story! Thanks for sharing, Marshall.

Congratulations!!! I’m sure Harvey & Judy passed some of .their great wisdom on to you both. They are now married over 50 years & must have passed that wonderful relationship advice to you both. I hear he is much younger than you, but also much wiser. You are both lucky to have such a good friend. I wish you both a long life & another 25 years. Maybe we can all get together for your 50th.

Congratulations on your thriving marriage! You are both to be commended. I’m so happy for you!

This is a truly fabulous story in otherwise troubling times. The fabric of what makes America strong is still intact. Congratulations. You set a great example for many people in many ways Marshall.

Marshall “you done good”. And believe me I know the feeling. I feel the same way about Kathy. Best to you both.

Marshall and Suzanne: Congratulations on 25 blessed years together. My husband and I
think you’re a wonderful couple. We wish you many more years together, dear friends.

Congratulations. My wife and I celebrated our 50th six weeks ago, our children and their spouses joining us on a cruise. These anniversaries give us reason to share the happiness with others and to reaffirm with each other. Keep at it, your 50th is only 25 years away.

What a wonderful tribute to a great marriage between two great people. It is always our pleasure to be with you two. Here’s to another 25! Mazel Tov.
Laura and Andy

I remember when you first started dating her.

Congratulations, you are a great couple.

Congratulations my friend…it is a wonderful thing to have that love as I have it as well with my second wife….Paulette’s birthday happens to be on your anniversary and of course it is also Flag Day.

Enjoy….give her our best and for you, go for another 25…heck you should make that without any problem…

To the Special couple;
Nothing is more rewarding than your special relationship; life is lived
by any means possible, however, one needs someone to hold on to.
Your story could be written under a Title “How to be happy.”
Congratulations, it is my pleasure to know you both and very much enjoy
sharing your talents. Also, thanks for sharing your story, it is a rare one indeed!
ima

A true love story which we have been privileged to be a part of. You two are fabulous and we want to thank you both for participating in our “surprise” 50th anniversary dinner. The violin solo was especially warm and wonderful and just your presence made the occasion special. Wishing you many more years of ecstatic happiness and continued friendship.

Congratulations to a terrific couple! I am HAPPY for you!

Congratulations and our very best wishes to two people that deserve everything good in life and in each other. John and Joan.

Congratulations from Vista and me.

Congratulations you two! We hope you have many more wonderful years together.
Don and I will have been married 25 years next Feb., and they’ve been the happiest years of my life. We think that mutual respect and consideration have a lot to do with our happy marriage. And having so much in common doesn’t hurt!
Stay well and happy…
Best,
Kay

Congrats. You both deserve the best–and seem to have gotten it. Here’s to many more years together.

Hey Squidgie – I met you over 60 years ago…before Harvey, even. And then, Margie and I finally met Suzanne when you visited us here in Atlanta. I noted how you looked at each other with an enduring love that I would like to look back upon with my beloved after 25 years of marriage.

Well, Margie and I will do our best as we follow along the path that you are preceding us on. You’ll be preparing for your golden anniversary when Margie and I reach where you are today.

We both wish you all the happiness that you have earned and should enjoy for what you have achieved together. Please send a picture of yourselves surrounded in love by as many of your children, grandchildren, and great-grandchildren as are able to celebrate with you.

Until we meet once again to celebrate our friendship, Margie joins me in wishing Suzanne and you all that you wish for yourselves at this “silver moment” in your life and love.