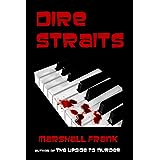 This novel has been re-edited, updated and re-released because of current interest by people in the motion picture business. A screenplay has been prepared by a reputable author/producer and is now being considered for promotion.

This is the second time Dire Straits has been subject to motion picture interest. The first group engaged in contract talks in 2003, but it never materialized into a movie.  Those interested in a signed copy of Dire Straits, can order from the web site marshallfrank.com. Also available via amazon.com in paperback or Kindle.
This book is for lovers of fast-paced suspense, twists, thrills and a bit of romance.  Here’s the back cover synopsis:
“Set in the steamy, drug-business world of Miami, Florida, a glitzy mansion is raided by gunmen looking for a huge stash of money. Four are murdered, but the killers overlook two witnesses in hiding. The woman, known only as Mirage, cannot allow herself to be traced by the police, the killers or her husband. Dire Straits is a frenzied, fast-paced thriller that brings non-stop suspense from start to end as slick Cuban Homicide Detective, Mike Estevez, stumbles upon far more than he ever suspected in a deadly week of terror.”
Review Comments:
“In the style of Elmore Leonard and the movie, Traffic, Frank delivers sensational details with realistic hard prose.”      — Asheville Citizen-Times
Dire Straits is a breath-taking page turner.” — Southern Scribe

“Marshall Frank writes what he knows and what he knows takes your breath away, heart pounding, pages turning long into the nights”  —  Edna Buchanan, Author of Legally Dead.

Marshall,
How exciting! I will take a look at the book. Please keep us posted on the movie pre-production.
Congrats!
Jaimie M. Engle

Marshall, I am delighted again…especially since I did the first editing of this book!!! Want to follow all this good news to the final end and hopefully a movie at last!!! Congratulations!!!! hugs and best to you,,,,sara

My wife and I read this together a year ago over a period of a few days, hard book to put down. Gripping story which tells us so much about the ‘insane energy’ as a friend describes it, of the bad guys who’re up all night scheming and out all day doing their worst. We loved the flavor of Miami and the surrounding areas as well.