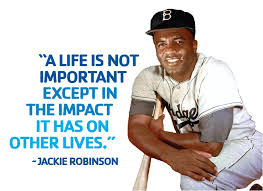 The movie was predictable. Even the most uninformed in the annals of baseball have heard of Jackie Robinson and his famous milestone of breaking the color barrier into the Major Leagues in 1947. We all knew how the story would begin and end.

But that’s not what was important. Most bio epics, from stories from Jesus to famous politicians, have known beginnings and endings. This story rehashed the old wounds of racial discrimination of merely 65 years ago, when black celebrities, in sports or entertainment, were relegated to separate bathrooms, water fountains and lodgings…still considered second-class citizens no matter when they went, no matter their wealth.

What the movie brought out was the horrid humiliations that Robinson was forced to endure, especially by fellow ball players, few of whom had the courage to come to his side, as did Pee Wee Reese. While Branch Rickey was credited with bringing Robinson into the majors, we didn’t really know how much he played a part in how the young star from the Negro Leagues would handle the firestorm emotionally. This piqued in a poignant scene, as Rickey is warning Robinson of what’s to come if he brings him into the Brooklyn Dodger team. Robinson alludes to having the courage to fight, at which time Rickey counters, “What’s more important, I want a player who has the guts not to fight back.”

Harrison Ford plays an Oscar-worthy portrayal of Branch Rickey, while Chadwick Boseman does an excellent job of playing Jackie Robinson. Also worthy of mention is Nicole Beharie, who played an essential role as Jackie’s wife, Rachel.

I was a baseball fan in 1947 and well remember the hoopla over a black man integrating major league baseball. It seemed strange, indeed. But I never realized what he had to suffer as he blazed the trail for the black ballplayers that followed; Monte Irvin, Larry Doby, Don Newcombe and Roy Campenella…and now, thousands more.

Jackie Robinson overcame hard adversity and discrimination, but his play on the field was all the answer he needed, as he posted a lifetime average higher than most of his teammates, (.311) and won the Most Valuable Player award in the entire league in 1949. He was elected to the Hall of Fame on first ballot in 1962, five years after his retirement.

Today, no one pays any attention to color or ethnicity, only batting averages and double plays. Following baseball’s integration, other teams sports followed suit, including football and basketball.

It is good that his legacy has been honored by retiring his number “42” from baseball, on all teams, the only number so chosen. In the wake of the recent Boston massacre, did anyone notice that the Red Sox, and other Major League Teams, were all wearing the number “42” on their uniforms?

“42” is a very good movie. It’s also a good learning experience for people too young to remember. It probably won’t win any Oscars, but it’s rated an 8 nonetheless.

Below, Jackie Robinson with Branch Rickey: 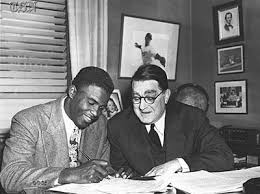 I was a great Jackie Robinson fan when he played for the Dodgers. He was my favorite baseball player, but I didn’t realize what a trailblazer he was back then. I just loved to see him steal bases! So glad that this movie has come out to inform a younger generation. I will see it with my son.

Saw it yesterday
I’m not much of a wuss but it brought tears to my eyes.
Margie had the same reaction.
Art

Saw it. Great movie. The courage of convictions and with the understanding it was going to be mind boggling difficult on both their parts; certainly more so for Jackie—an understatement for sure.

In my mind it was the beginning of the tide coming in—long over due. There were ultimately Jackie Robinsons in all walks of life. We certainly had a fair share in the Department. It was interesting to me that Richey initially advised Robinson it was about the money. Later when the $*it hit the fan and Robinson was struggling with the burden, Richey told of his own college experience and offered up how he always felt he had not done enough to help one of his black teammates. Everyone draws on their own experience.

I remember moving to Florida as a kid in 1962. My first notice to the still adopted segregation in many stores, was when I was shopping with my uncle at Kwik Chek. I took a drink from the “colored” fountain. Had only been in Miami for a week and didn’t even know what it meant or that I did some thing wrong. Where I came from in CT some of by best friends were from the YMCA and there was no color barrier. Never even thought about it—until my uncle grabbed me by the collar. He too was from CT and had a different view; he just didn’t want any trouble from whoever may have seen it. A different time for sure.

As a little boy I too was a big dodger fan! My first game was at Ebbets Field to watch the dodgers beat the giants. When Jackie Robinson joined I was thrilled. I didn’t know what prejudice was all I knew was he could really hit the ball, and was a great fielder, and that was all I cared about. I couldn’t understand what all the hoopla was about, until many years later. Dad liked him, so I liked him. All my heroes were dodger players and color never entered it. Jackie Robinson was one of my dodger heroes!!!

I rarely follow baseball anymore. Yes, I’m still call myself a dodger fan, but just when I get to know one of the better players he’s gone to another team, sometimes to a team I don’t care for. Most of my early heroes spent their entire careers with the dodgers. Sadly baseball has lost me as a fan, and at my age I won’t be coming back.

Marshall, In 1952-53 I saved a couple dozen baseball cards from bubble gum packs. The ones I coveted the most were Jackie Robinson and Eddie Matthews. Unfortunately around 1992, my sixteen year old daughter invited a group of kids in the house while my wife and I were both at work. The cards, along with jewelry and tools were stolen, and the sheriff’s department didn’t seem very interested in investigating the theft.

I look forward to seeing this movie about one of my childhood heros!!!

Once in a great while Hollywood actually makes a decent movie.
I look forward to seeing 42. I too am a huge baseball fan, having
played shortstop from Little League on thru High School. I was a
great fielder poor hitter but an excellent bunter and base runner.
I still love the game, dont care much what color the player is,
care more about his attitude and presence on the field and off.
Hate Bonds for almost destorying the game, hate McGwire just as
much. I do not think Clemens took steroids, I do not believe the
bullshit by his “trainer”. Oh by the way will Hilliary be tried
for perjury as Clemens, now that there is a memo with her sig on it that
completely conradicts her sworn testimony before Congress. I hope
at least that this Bengazhi scandal will keep her outta the White
House!! My GOD Bill Clinton AGAIN!!! What a f—ing disaster that
would be, Hilliary once wanted to open the VA hospitals to civilians.
Thats the kinda extremist she is.