HONORED BY THE DON ARGO AWARD FOR FICTION 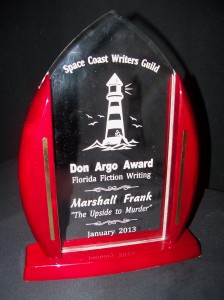 This is all about irony and the fate of two authors.

On Sunday, the 27th of January, during an annual writer’s conference in Cocoa Beach, Florida, I was honored to be presented with the presitious Don Argo Award for Fiction Writing by the Space Coast Writers Guild, for my newest crime novel, The Upside To Murder.

Not only am I duly gratified, there is a poignant story about Don Argo and me, and what led up to the completion of this book which — incidentally — is now under consideration by a motion picture production team. For me, it is not just an award, it’s a message about courage, determination, love and struggle.

Donald Argo was a fellow author and friend. As fate would have it, we met at a book signing in 2004 like authors often do. He had penned Canaveral Light, an historical, post-civil war novel about migrants who settled in the east coast of Florida which is now Cape Canaveral. It was meticulously researched, with clear and interesting characters. Many copies were sold.

Don didn’t seem the intellectual sort – until you got to know him. He was born and raised in Arkansas, spoke with a distinct accent like he’d just come from the farm. But not to be fooled. Don Argo was also a mathematics processor at the local college, thought to be a virtual genius by most who came to know him, students and faculty alike.

We formed a critique group a couple years later. Every two weeks we’d meet and wrangle over each other’s nascent manuscripts. He was writing a sequel to his book. I was working on a new novel about the failures of the criminal justice system and how the father of a brutally assaulted daughter had to deal with cops and criminals. The Upside To Murder featured a tenacious and powerful character in Dr. Orville T. Madison, an African-American physician with an undying, unselfish devotion to his injured daughter.

We were about halfway through writing the books when Don became ill. We temporarily suspended the critique group for a while until Don could recover. As it turned out, it wouldn’t be temporary. As Don’s manuscript lay unfinished, so did mine. For two years, Don fought multiple illnesses, including cancer. For me, the story was on hold, perhaps forever. I had moved on to other things.

The last time I saw Don at his home, he was struggling to speak. We had a difficult visit, but it was important for him to know he had a caring friend, an admiring friend. I knew then, I would probably never see him again, alive. It was difficult indeed to say goodbye, without bursting into an emotional episode. But I managed.

As I headed out the door, I heard his raspy voice trying to call out, “Marshall!”

He passed away two days later.

It’s unlikely that The Upside To Murder would ever have been completed if not for that solitary moment and a laborious utterance by a dying man who thought, not of himself, but of me and a character in my book that we hadn’t mentioned in two years.

Those final three words told me how much he cared. In his dying breaths, he expressed his love and admiration for my writing skills. He implored me to finish. His days and hours were numbered, but he could still care about others. When he died in 2008, the Space Coast Writers Conference established the Don Argo award for excellence in writing fiction, in his honor.

And so, I dedicated the book to Donald David Argo, without whose confidence and affection may never have been seen the inside of a book cover.

How ironic it is, that I now hold a writer’s trophy that bears his name.

Whatever comes of The Upside To Murder, I will forever know it was a joint venture.

Congratulations, Marshall, on the Don Argo Award–you certainly deserve it. UPSIDE… is a novel you and he can be proud of. Keep us informed about the movie, but more than that, keep on writing. Proud to have been in the Plotters with you!

I’m writing this through tears after reading your words. I, too, remember that day, vividly, will probably never forget it. I so enjoyed the times I accompanied Don to Perkins to meet you so the two of you could bleed over each other’s manuscripts. I’m thrilled that this particular book won the award named in his honor. It is, indeed, ironic. You know he would have been ecstatic. I, too, share his admiration for your writing skills, and I’m glad you chose to share this story. Thanks, and congratulations!. . . . . . .from Don and me 🙂

Don Argo was right about Orville. I think the award went to the right person and good luck with the movie thing.

Congratulations, Marshall. You certainly deserve recognition for your book and your writing career.

All I can say is wow. Heart wrenching

What a lovely story Marshall!

Marshall, that was a beautiful tribute to your friend, Don. He would have liked it very much–maybe he does like if what I keep reading and hearing is true.

Marshall,
My admiration for you and your work goes without saying (although I did just say it, huh?).
There’s nothing I can say about your friend and your manuscript that you haven’t already said with the career of a cop and soul of a poet.
Congratulations on an award overdue and well deserved.
And tell your wife — whichever one it is (we still laugh about that line) — that broken and misshapen pottery adorning her garden tells me more about her delightful personality than two hours of conversation.
Lew

Marshall thank you for sharing It will make my copy of your book even more meaningful to me.

Marshall
It is a great book and the history behind its writing just as wonderful. Cogratulations on the well deserved award not only for this book but for the many other publications you you have written. Many, many, Kudos for your efforts.
Keep on writing!
As always I remain a good friend,
Fred

Congratulations, Marshall. Lovely story about Mr. Argo. We pray you are blessed with a movie deal. Let us all know the good news when it happens so we can rejoice with you.

congratulations, well deserved, you are an amazing talent. Thanks for your blog hospitality.

Congratulations, you certainly deserve the award.

Marshall, it is easy to tell when a man is writing from the core of his heart. It never gets any better than that. I do admire you.

We’re all standing at the ticket office at AMC waiting to buy tickets. None of us are getting any younger, but after enjoying the book, we’re patiently waiting for the movie. C’mon, the popcorn’s getting cold and the ice is melting in my diet Coke.

You gave a “10” to a movie? Canico didn’t give a “10”, not even for solfeggio. Who of your legion of followers knows what solfeggio is?

Where’s the next book?

Warmest to you and love to Suzanne,

I know “none” is singular.

Great to see you receive such a prestigious award Marshall. It is certainly deserved.

It took a great woman to inspire you to these new heights. Congrats and best wishes for many more books and awards. Never met two people who were more in sync…..Congrats again on an award well deserved. You both are awesome.

I thought that book was your best work, Marshall. Congratulations on the award and thank you for sharing your story with us. Hi to Suzanne, too.

I enjoyed your book, as I have enjoyed all your books, but the story behind the book made it even more meaningful. Hope we see this one on the screen.

To Sir Marshall:
Congratulations, the ‘DON ARGO AWARD’ is well deserved; Your Books inspire other writers, with the passion and soul searing adaptations you share in your writings. Sure the movie will be as much a ‘Best Seller’ as the Book. ima

Congratulations Marshall on the Argo award and the rave reviews for your novel. Your genuine compassion for those in need is a reward to all. God Bless You.