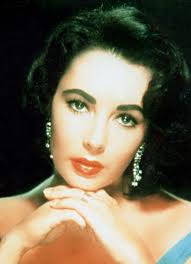 No one came close. Not even Bo Derek.

Like no other, Elizabeth Taylor set the standard for beauty, grace and talent.

We all will have our turn one day. She had hers yesterday, passing into post-life as all mortals do, eventually.

As a movie buff since early boyhood, my eyes, my mind and my heart were forever drawn to the screen, breathless, every time I saw her in National Velvet, Father Of The Bride, A Place In The Sun, Cat On A Hot Tin Roof, Virginia Woolf and so many more. Every feature of her face, her body and her attitude spelled: Flawless.

Couple that with acting talent (two Oscars) and an open heart with which she shared her wealth with the needy, giving of her time and energy toward the international fight against AIDS.

We all know about the marriages, the weight problems later in life, her battles with alcoholism and more. Though a Goddess, metaphorically, she was a fragile human being after all, prone toward love, addiction and excess. But she always maintained dignity. She married the men she loved, all seven of them, which is more than we can say for the nature of relationships we see in today’s array of Hollywood glitz.

She earned a mere $100 a week for her work in Lassie Come Home, and eventually became the first actress to draw $1 million for her part in Cleopatra. I thought she was mis-cast in that movie, simply because she was too Anglo, too light skinned, too petite to be playing a role that portrayed an Egyptian woman of the Roman era.

Taylor was also a woman of deeds. Few people know, or remember, that she saved actor Montgomery Clift’s life after a party at her house, when he wrecked his car. She was first to arrive at the accident scene, entered the vehicle and reached into his mouth to remove broken teeth from his throat.

There are numerous sites to access if anyone is interested in trivia about the life of this iconic woman. USA Today newspaper, this date, dedicated nine pages of newsprint — That’s 9 Pages! — to Elizabeth Taylor, just because she died, and lived. Some folks will compare that to Japan, Libya and other dire events that are going on in the world and say she’s not worth all that.

I’m glad I lived in her era.

I had the Elizabeth Taylor, wedding paper-doll set when she was in the moive “Father of Bride” and her first marriage to Nicky Hilton… bet you didn’t Marshall 😉

Marshall…I never got to meet this lady, but when I took an hiatus from L.E. in the late 80’s, I sold cars in upstate NY. An attractive woman came in to buy a car from us, and I waited on her. Her name is Liza, and she brought with her a very young son… about 2 at the time. We made our transaction, and when I sent her into the business office to finalize the paperwork and schedule delivery, the business manager told me it was Elizabeth Taylor’s daughter. I laughed at him…but he was serious. On closer inspection, she had a lot of her mom’s good looks, but her son was the spitting image of his grandma.
She was indeed a fine actress, and lady.

Marshall, I see that Elizabeth Taylor was to you, what Paul Newman was for me…a 10 x10!

I regret from reading your sweet tribute, that Elizabeth Taylor never got to read it!!
You probably never sent a fan letter, (nor have I), but I hope somehow she knows how special she has been to so many!

Yes, a true beauty; a wonderful philanthropist, and an actress my Mom loved. They shared the same birth year; 1932. Liz being born 22 days after Mom. Mom use to say “Why couldn’t I be like Liz Taylor?”

Bobbie,
Fortunately for you, your mom was your mom, and not Elizabeth Taylor. It could not have been easy to be a child in her world.

She was indeed a beautiful woman. I first saw her as someone to follow when she married Eddie Fisher a hundred million years ago..while she did tend to marry a lot of fellows, she did marry them, not just sleep with them.

Her love of all, as she said before Burton and died in the plane crash, unfortunately the name now escapes me and I don’t have time to look it up…

She was the queen of the screen, and will probably be remembered that way by all of us who were fortunate enough to have seen her.

tho i prefer brunettes, i was never that taken with elizabeth taylor. i guess i like women that are more natural looking. i guess i can be accused of lack of taste.. i remember reading an interview with richard burton where he was asked”how great are elizabeths breasts”. his answer was nothing special! from then on, i was disenchanted.

I have a theory, though I note you didn’t ask. Here goes, anyway…

When I nursed my first son, ( and as far as boobs went, they were not bad), I had an epiphany…my breasts actually had a purpose OTHER than to serve as a landing zone for drooling gazes. He never said it aloud, but when “new Daddy’s toys” were so busy working hard for our baby, there was an aura of sadness.. Ah well, they were NEVER the same, and they served two more tours of duty!

Ya know, I just had yet another epiphany…My former spouse of 20 yrs. found himself a “new” wife, and, b.t.w; she had never had HER “parts” worn down & out by that “Mommy” stuff. Talk about “disenchanted” !!

Hey, thanks for the lighter side of life issue…

While I thought Elizabeth Taylor was a stunningly beautiful woman, I thought she was, at best, a mediocre actress–despite her two academy awards for acting. I never understand those who praise her acting chops.

I also found it interesting that, despite the criticisms for all her marriages, she really did believe in serial monogamy. She claimed she never ever slept with any men who she didn’t subsequently marry–although she had several affairs with married men who she eventually married.

She seemed to have what I would call situational morality.

I think Maryl Streep is the best actress I’ve ever seen on the big screen, able to adapt to almost any challenging acting demands–including regional dialects. Elizabeth Taylor would not even be a close second to her.

Even so,I appreciate your lovely tribute to Ms. Taylor.

Ah, Elizabeth. I am truly saddened by her passing. I saw her in National Velvet when I was barely 15, so I have followed her career all my life. Gorgeous, yes. According to fotogs, she didn’t have a “bad side.” The Eddie Fisher episode left a bad taste in my mouth, but not enough to turn against her. It was an illustrious, tempestuous career and she probably never had to scrub a floor, yet I wouldn’t have traded places with her for all the tea in China. Besides, I have sworn off tea anyway. I feel certain that the powers that be are already creating a “special” in her honor. I look forward to that. God rest ye, Liz.

Hate to tell you this, but the key to her beauty during her early career was the lack of makeup. She had pure natural beauty. That is what lured the men and boys to the role played byMontgomery Cliff in “Suddenly Last Summer” …….. Liz (without makeup) on the beach in a one-piece, nothing fancy but Liz, bathing suit.

I completely agree with you. She was a natural with no plastic around her whatsoever.
She was very simple, beautiful and unique. I was a fan too, and felt really sorry to see her get so blotted the last time I saw her. I am sure she is resting now with no pain. I saw all her movies and enjoyed them. Thanks,

You know me Marsh, I’m a Natalie Woods fan. She was almost as pretty as Judy.

when I saw your list of her films and you left out “Cleopatra,” I knew I had to read it to the end – discriminating judgment. TV has been full of clips from her films including “Cleopatra” but that was far from her best. Of those I’ve seen, “Who’s Afraid Of Virginia Woolf” has to be the best, she was great in that but the credit has to be shared with director Mike Nichols.

I never thought much about Elizabeth’s beauty. I heard other’s goo & gaw about her beauty; but I never thought she was a raving beauty. Of course……beauty is in the eye of the beholder. I remember ( yes….when I was much younger) there were ladies I dated who some of my friends referred to as “PURE” dogs. To me they were obviously attractive…or perhaps since I was attracted to women who I thought were attractive AND smart, my colleagues looked at my female friends in a different light. BUT, this is a two way street. I saw my friends date girls that I thought were so ugly they had been dipped in the ugly pond. At any rate, Elizabeth Taylor never caused hypertension or a fast hear beat for me. “Still,” God rest her weary soul.